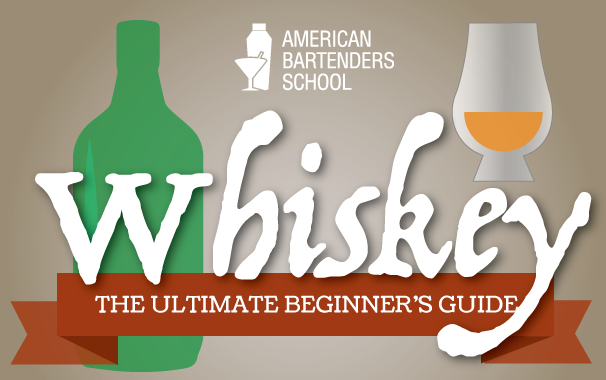 This is a very popular question and the simplest answer to this question is this: Bourbon is a type of Whiskey.

Whiskey is a spirit made from fermented grain. Bourbon is made using a specific type of grain and specific aging process. So – to quickly dispel myth number one: Bourbon DOES NOT have to be made in Kentucky. It is the process that determines the type of whiskey.

To really understand, we have decided to dive a bit deeper and help to clarify the whole process for you. American Bartenders School teaches a great lesson on whiskey during part of its full class. Knowing the difference is something that separates the good bartenders from the mediocre. Bartending in NYC and throughout the world requires intimate knowledge of what you are serving, because there is always a customer out there who thinks they know more than you.

But, here is a primer to get you started and some great facts to impress your customers, family, and friends.

Without further ado: here is the infographic!

Whiskey is a spirit that is distilled from fermented grain mash. This same grain mash is the stuff that is also used to make beer. In both processes, the grain is steeped in hot water for a time to release sugars. This sugary liquid becomes “wort”. Then the wort is fermented, by adding yeast, which converts the sugar to alcohol.

The only difference is that when making beer, they also add hops when producing the wort. This helps add flavor to the beer and balances the sweetness. Whiskey doesn’t need hops because it ages in oak barrels to balance the flavors.

So, after the wort is fermented, it becomes ‘wash’. This is fermented liquid that is ready to get distilled. From here it is placed in a still, such as a pot still or column still. This heats up the liquid and the vapors travel through a pipe at the top and come out the other side. During this distilling process, the alcoholic content is increased. This happens two or three times and in some special cases up to twenty times – each time the liquid becomes more alcoholic. Then the whiskey is transferred into casks or barrels where it is aged. As they age, they are blended with other whiskies to create that particular brand’s signature flavor.

This is the process in the most simple form.

The type of whiskey produced, however, is dependent on many factors. These include the geography of the distillery, the type of grain used, the distillation method, the type of casks, and any other things added to the final product like coloring or other spirits.

This is highly debated, but comes down to the origins of the word and who you are talking to. The New York Times dove into this issue and came out with the understanding that if you are talking about whiskey in general, it is fine to say whiskEy. However, Canadian and Scottish folk say Whisky. So – when referring to scotch (because it’s from Scotland), you would say scotch whisky – no E.

This is what you will hear most people talking about when they talk about whiskey. Basically, a SINGLE MALT whiskey is one that is created from one distillery, made from a mash that only uses one particular malted grain. (For example, a single malt scotch whisky is made from malted barley.)

A BLENDED whiskey is one that is the made from the blending of different types of whiskeys from many different distilleries.

You can also have BLENDED MALT, which is a blend of SINGLE MALT whiskeys.

IMPORTANT: All whiskies are blended! A single malt is still blended! So, don’t be a whiskey snob -only you can decide for yourself which whiskey is the ‘best’.

Here is where things get a bit confusing. The easiest way to remember all of this is that it is ALL whiskey. The word that comes before it tells you where the whiskey comes from – and each country that makes whiskey has its own rules and laws that they have to abide by.

Scotch Whisky is whiskey that MUST be made in Scotland.

To be specific, it has to be

American Whiskey is whiskey made in America. However, unlike Scotch, some of these whiskeys below can be made outside of the US (with the exception of ‘Tennessee Whiskey’). There are several different kinds:

The reason these are in place is because back in the 1800’s, old timer distillers used to mess with their whiskeys, sometimes trying to enhance the flavor, other times trying to dilute them. This eventually led to the Bottle in Bond Act of 1897, which helped come up with the stipulations above.

Tennessee whiskey is American whiskey that is made using the ‘Lincoln County Process’. Before the whiskey is moved to the barrels or casks, it is filtered or steeped in charcoal. This was signed into law by the governor of Tennessee on May 13, 2013. The most popular of these is Jack Daniel’s.

Canadian Whiskey is whiskey made in Canada. Here the rules are a bit different.

Irish Whiskey is whiskey that MUST be produced in Ireland – Irish whiskeys are normally distilled three times (with one exception).

By law, Irish whiskey must be:
-produced in Ireland
-aged in wooden casks for a period of no less than three years
-unpeated malt is almost always used

Japanese Whisky has been growing in popularity since the early 2000s. They produce whiskey that is most similar to single malt scotch from Scotland. It is also made from malted barley. Popular brands include Nikka and Suntory. Japanese whisky is also closer in taste to traditional Scotch whisky because many of the Japanese companies are buying distilleries in Scotland in order to make their whiskies.