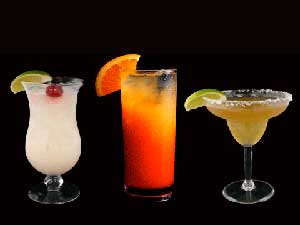 Have you ever wondered where do all those crazy alcoholic drink names come from? Every time go out to a restaurant, I  see a drink menu that has a long list of alcoholic drink names that have the word martini or the ending tini in the name. Their ingredients little to do with an actual martini recipe. How did this happen? Where do bartenders find these names like Appletine or Chocolatetine? Other examples are the class of cocktail drinks that have sexual connotations like Sex On The Beach, Leg Spreader, or Dirty Red Headed Slut.  We teach many of these drinks at American Bartenders School.

The origin of most cocktail drink names are unknown or based on vague legends and myths, but some follow patterns. These are some of the ways mixologist come up with interesting names.

They are usually related to a class of alcoholic drink recipes called shots or shooters.  Most of these alcoholic drink recipes use multiple liquors and mixes.  They are drank in one swallow and are meant to create a quick alcoholic buzz. The largest group of new alcohol drink names have to do with sex or profanity.  While many of the alcohol drink names appear to be juvenile, they continue to be popular with young customers according to bartenders in New York City.  Bald Pussy, Blow Job, Absolut Sex, are only a few.

Sometimes the liquor determines the name. The Bacardi cocktail was invented by the Bacardi Rum Company. Another example is the shot Absolut Sex . It’s named after the one of the key ingredients Absolut Vodka.

In the past bartenders often used special events as an excuse to name new cocktails. A example is the Japanese Cocktail, named in the mid-19th century for the first Japanese delegation to arrive in the United States. The Obama Mama, a drink that was advertised in a few Washington D.C. bars after the 2008 victory or President Obama.

Alcoholic drink recipes are named after famous people. The Gin Rickey was named after Colonel Joe Rickey,the Negroni after Count Camillo Negroni and the Ramos Fizz named after a well know New Orleans bartender Carlos Ramos. The Shirley Temple is a non-alcoholic drink that became popular in the 30’s and was drink parents ordered for their children.

The Manhattan a famous classic cocktail was named after the Manhattan Club in New York in the late 1800’s where it was first served. Rumor has it that the Russians had a drink called the Chernobyl made from chilled vodka and shard of dry ice.

Another group of names are derived from sequenced numbers name or a variation of the original name. Snake Bite 1, 2 and 3 are good examples. Red Headed Slut and Dirty Red Headed Slut are another.

Now that you have some basic guidelines on naming drinks you need to put on your thinking cap and come up with the next great cocktail name.